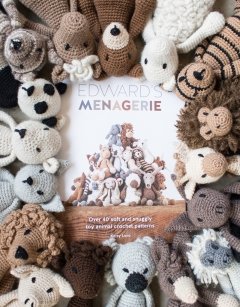 'Get ready to spend time with a suave high-flying rhino, a lovesick elephant who knows her way around a kitchen, and a seriously chivalrous tiger.

With just two weeks to go before baby Edward's due date, yarn enthusiast Kerry Lord picked up a crochet hook for the first time and a new obsession began. Over the next 12 months the collection of crochet animals expanded week on week until Edward's Menagerie was complete with 40 unique patterns.'

These cute animals with larger-than-life personalities are made using simple crochet techniques and the step-by-step instructions enable a complete beginner to get hooking straight away.

Each animal also has a universal pattern - where you can change your hook and yarn to create four different sizes, making 160 different possibilities.

No special equipment needed and less than one ball of yarn per animal - so get crocheting Seamus the Alpaca, Clarence the Bat, Bridget the Elephant, Rufus the Lion, Claudia the Saddleback Pig and many more - once you've made one you'll want to stitch the whole menagerie!

Kerry Lord is the designer and founder of the TOFT Alpaca Shop.